Products
Show all results for ""
Menu
Your cart

Your cart is currently empty.

In this new world of tangled worries, my puppy keeps me sane

Lola Montez and Gadget the cavoodle are delirious in their play: on hind legs and wrestling with bear-cub front paws, pashing with drooling mouths; rolling across the grass, legs akimbo then wrapped tight around the other’s furry body in mad embrace; then up and off, zooming away, flying and skidding back.

Last time we crossed dog-park paths, Gadget’s owner, Kim*, gave me a recipe for kangaroo risotto – minced roo, rice, a can of kidney beans, oats, grated carrot. Lola Montez wasn’t too fussed about the risotto. I’m not too fussed about being my fussy puppy’s personal chef.

Today Kim and I are talking employment, or lack thereof. As Gadget pins Lola Montez to the ground, I complain about a media industry in crisis, the freelancing hustle, impending penury. Kim reveals she was made redundant from her HR job a month ago. “I get to spend more time with Gadget,” she says, as a giant groodle, who has yet to understand that playing fetch requires releasing the object of the exercise, hovers nearby with a ball in his mouth and a crestfallen expression. 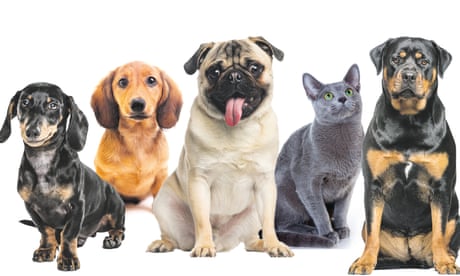 Love you to death: how we hurt the animals we cherish

In the three months since a tiny chocolate-brown labradoodle upended my life, this has become my pandemic pattern: arguing with my capricious wild child at the end of her lead on the way to inner-Sydney dog parks where the conversations reflect life in this extraordinary new world of tangled worries, mass unemployment, financial stress, home offices and home schooling, geographical relocation, plus anxiety, loneliness, boredom and uncertainty.

A torrent of redundancies is laid bare: a single mother with two school-age children tells me she has just lost her job as a project manager with an ad agency; her toy poodle the size of a thumb engages Lola Montez with the intensity of a prize fighter as the woman wonders what’s next. A 40-something bloke, the owner of a gargantuan black groodle, is reserved the first couple of times our dogs sniff each other’s backside, but he warms up. One day we introduce ourselves: his name is Mark, his dog is Iggy, named with Iggy Pop’s Dog Food lyrics in mind. Mark was laid off as general manager at a prominent tourist attraction a couple of months’ back. “I look every day but there are no jobs.” His golf handicap has dropped. He tries to moderate his Netflix consumption. He’s thankful his partner still has a job. Jobkeeper is helping.

Stories from the dog park reveal other facets of the zeitgeist: the pivot, for example. A makeup artist, the custodian of a small feverish chihuahua, tells me he’s happier with edgy editorial work but has accepted a nine-to-five job for a mass-market fashion conglomerate. Pays the bills. I chat with a young woman with a gorgeous mass of red hair and a fluffy cream cavoodle about the oodle invasion as Lola Montez spars with her puppy. Only a year out of uni, she recently lost her job at a PR firm. A change, she thought, and enrolled in a diploma of community services. She’s interested in issues of social justice. She didn’t like PR anyway.

For a while one day I talk with a friendly woman with a timid rescue Maltese shih tzu. She tells me about the dog’s traumatic history, about how, when it was only six weeks old, a breeder drugged it and air-couriered to its first unwitting new owner. Some years on it had a nervous breakdown and now has major separation anxiety issues.

We talk about the Covid-19 puppy boom; the parks are full of silly-as-a-wheel young things and the old dogs are fed up with youthful assaults. On a labradoodle Facebook page I follow, mournful would-be dog owners lament the length of waiting lists for puppies and breeders comment about the unprecedented demand. I hope, I say to the woman, that barbarous people such as the one who bred her dog aren’t taking advantage of the demand and that new owners are committed. And what about the mass separation anxiety that might unfold should we ever go back to the office?

I love my dog. But why must walkies involve horrendous social interactions?

On another day, I overhear a woman with two young bounders called Campari and Soda also talking about relocation. She and her partner are moving out of the city, back to the outer-suburban neighbourhood where their families are. She can work from home and besides, she says, “there’s nothing happening in the city anyway”.

Who was it who said, if you want to meet people, get a baby or a dog? Through this seminal period in the history of humankind, my puppy has helped me stay sane. I have stopped and had long chats with neighbours I usually would rarely see, exchanged messages of support, agreed to catch up when all this is over, met new neighbours. The loneliness that haunts me has dulled – I live alone and, even in the best of times, work from home.

And there’s something else my puppy has brought to me: I named her for a wild and unbridled “devil woman” – Lola Montez, a dancer, actor and the mistress of King Ludwig I of Bavaria, who brought her exceptional lust and joy for life on a tour to Australia in the 1850s.

Watching my Lola in the park during one of her euphoric performances with Gadget, or any one of umpteen other dogs, something has been catching, and it’s not a virus. Her mad excitement and joy: it comes home with us and stays for a while.

All our products are lovingly hand-made just for you by our local suppliers.

All our products are ethically sourced and made from high quality raw materials.

We offer free worldwide shipping of 4-8 weeks on all orders. No codes, no minimum quantity needed - just free.

If you are not fully satisfied with your order we will offer your money back within 30 days.

()
has purrchased Always Together Photo Memory Box 🐧
ago Verified

()
has purrchased Cotton Cat Collar with Bell 🐧
ago Verified

()
has purrchased Diamond and Gold French Bulldog 🐧
ago Verified

()
has purrchased Dog Parka with Detachable Hood 🐧
ago Verified

()
has purrchased Earl of Scotland Round Cat Basket 🐧
ago Verified

()
has purrchased Forever in My Heart Photo Keepsake 🐧
ago Verified

()
has purrchased Hand-beaded Dog Leads from the African Masai 🐧
ago Verified
;